We are pleased to be able to tell you that the the bridge and the approaching footpaths have been completed.

There is a level footpath running a short distance through the woods from the gate on Badgers Holt to the bridge and on the other side of the bridge a gently rising footpath to join the path on the quarry side of the park.

The main motivation for getting the bridge and footpaths in place was to improve accessibility and we are gratified by the comments we have been getting from people about what a positive difference the new bridge and footpaths have made to their ability to enjoy the park.  It is now easy for people using mobility scooters to cross the stream. 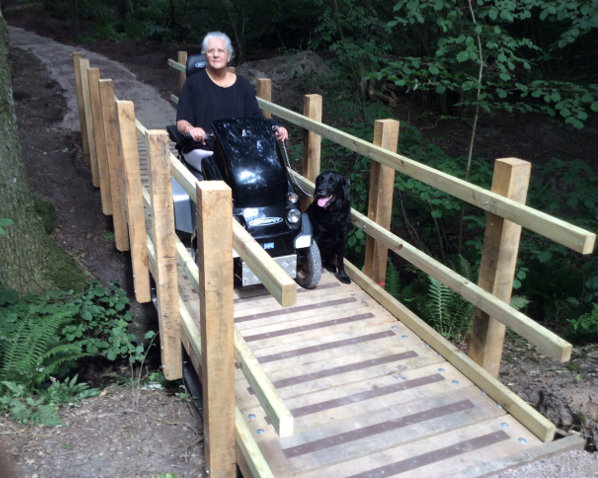 We would love to hear from people about what they think about the new bridge and footpaths.  Email us on sandgate.conservation@gmail.com or send us a message us on Facebook – www.facebook.com/SandgateConservation.

The works have obviously left some marks on the landscape, for example where soil has been moved to create the footpaths and piled up along the side of the paths, but in time the vegetation will grow and hide the soil.  Also,  it is hoped that with the new footpath in place people will avoid walking across the bluebell and wild daffodil areas and these will regenerate in time.  We plan to clear the stream of the logs and other debris that was used as a makeshift bridge now that it is no longer needed.

Over the next few weeks and months people should also see some other changes, such as a signage board and a dog poo bin, for the quarry area of the park.

As we move into mid summer the woods have become quieter as bird nesting tails off.  The heather is flowering and is looking reasonably good considering the die-off due to drought last year.  The wet heath pond looks much better now that the fence has been removed from around it.  Fungi are already starting to appear here and there.

The quarry area of the park is still full of wildlife activity.  The meadows are a mix of wild flowers and grasses that are attracting a wide variety of insects including a variety of butterflies.  The quarry is a regular nesting site for sand martins and the birds can be seen swooping over the grassy areas.

Please avoid creating new paths across the meadows as this results in fragmentation which significantly degrades it as a wildlife habitat and causes disturbance to the wildlife that lives in it.  Also, keeping to the footpaths greatly reduces the risk of you and your dog picking up ticks that could carry Lyme disease.  The footpaths around and through the meadows are clearly defined as they are finished in yellow Fittleworth stone (there are some tracks for infrequent use by maintenance vehicles – these are not intended to be used general footpaths) and the area can be fully enjoyed from the footpaths.